It’s one of the most special days on the calendar every year – that’s right, the London Marathon is almost upon us.

On Sunday, some 42,000 people are expected to run the 26.2 miles from Greenwich to The Mall, raising millions of pounds for charities as they go.

This year’s marathon marks the third and final time it will take place in October – moved because of the Covid-19 pandemic – with the race returning to its traditional spring date in 2023.

Here’s everything you need to know about the 2022 London Marathon.

Who is taking part?

The race will be officially started by England’s Euro 2022 champions Leah Williamson, Ellen White and Jill Scott – the latter no stranger to the event after winning the Mini Marathon back in 2001.

Four-time Olympic champion Mo Farah had been due to headline this year’s elite men’s race but withdrew earlier in the week because of a hip injury, while women’s world record holder Brigid Kosgei – a two-time winner in London – was also forced to pull out.

Eliud Kipchoge, who broke his own men’s marathon world record last week in Berlin, is not taking part but will be in London to present medals to winners in the Mini Marathon on Saturday.

In his absence, defending London Marathon champion Sisay Lemma and Ethiopian compatriot Kenenisa Bekele are among the favourites for the men’s title, while the women’s race is headlined by last year’s winner Joyciline Jepkosgei of Kenya and Ethiopia’s Yalemzerf Yehualaw, who set the fastest debut time for a marathon.

Charlotte Purdue flies the flag for the Brits in the elite women’s race, while Phil Sesemann will hope to improve on his seventh-place finish from last year in the elite men’s.

In the wheelchair races, Switzerland’s Marcel Hug and Manuela Schar are back to defend their titles in the men’s and women’s races respectively, while Australia’s Paralympic marathon winner Madison de Rozario and Great Britain’s eight-time London Marathon champion David Weir will also compete for a share of the biggest wheelchair racing prize in history.

“For the London Marathon to be taking a stand and increasing prize money for wheelchair athletes is really powerful and sets a benchmark for all sports globally,” said Weir, who is making his 23rd consecutive London Marathon appearance.

There are 28 official Guinness World Record attempts being made at the London Marathon this year, including the fastest marathon dressed as a bottle, wearing riot gear, and on crutches.

The oldest participant is 89-year-old Koichi Kitabatake from Japan, while Alex Horsley from Bournemouth will celebrate his 18th birthday on marathon day. He is one of 205 birthday runners who will hope to be on the start line on Sunday.

That could depend on the rail strikes that have been causing headaches for those travelling to London.

Organisers say they are doing “everything we can” to help runners facing travel disruption due to a planned strike by rail workers, with 90% of rail services not running on Saturday. Services are also due to start later than usual on the morning of the race.

Race director Hugh Brasher told BBC Sport that runners who arrive late will be allowed to start in a later pen.

The 250m stretch will be located on Butcher Row in Limehouse, just past the 21-mile marker.

Talking of those markers, new 100 percent recycled mile markers will be in place this year, constructed from four tonnes of plastic waste.

The 2022 marathon also sees the introduction of more inclusive policies. These include enhanced deferral options for pregnant or postpartum participants, and entries for assisted participants.

If you’re running on Sunday, we hate to break it to you – there is a chance you’re going to get wet.

The current forecast suggests rain showers and light winds for London, with highs of 16C. 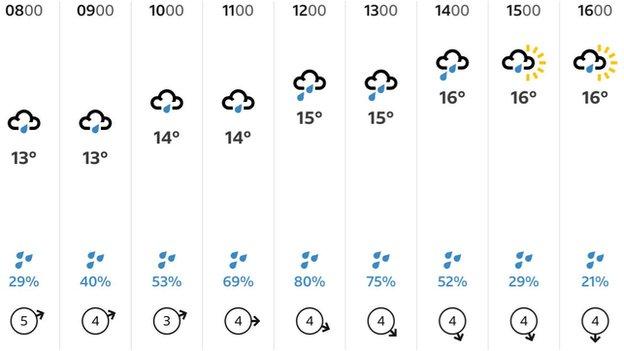 All times are BST and subject to change.